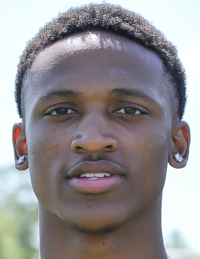 Wide Receiver
B I O
Ranked among the top 150 players in the nation by ESPN…they have him ranked No 135 overall, sixth best in the state of North Carolina and as the 18th best wide receiver in the nation…ranked No. 195 overall by 247 Sports, No. 234 by Rivals and No. 231 by Scout.com…eighth best player in state of North Carolina by Rivals….played in the Semper Fidelis All-American Bowl…played in the Shrine Bowl for North Carolina…had terrific senior year with 78 catches for 1251 yards and 15 touchdowns…also had a rushing touchdown for 16 total touchdowns…also had seven interceptions on defensive side and 34 total tackles…as a junior had 31 receptions for 577 yards and four scores, an average of 18.6 yards per catch…team finished with a 13-3 record on the gridiron…also a starter on the basketball team where he averaged 14.6 points a game as a junior…also had 6.2 rebounds and 4.4 assists per game…shot 55 percent from the field for team that finished 21-6…averaged 8.2 points a game as a sophomore on the hard court… played his high school football for Kevin Gillespie…selected Clemson over offers from Tennessee, South Carolina, NC State and North Carolina…recruited by Robbie Caldwell and Jeff Scott.

Mickey Plyler on Overton: This class needed a tall wide receiver that has basketball type skills. They needed a guy who can go make plays on the deep ball and make smaller DBs look bad on the jump ball stuff. Overton fits this perfectly. He is still raw in some areas but he has a huge upside. With Mike Williams coming back, this gives Overton time to develop.

Clemson offered on 12/8/14 and he committed on 1/03/16. He is also a basketball prospect that had an offer from Virginia Tech.

TigerNet watched him at the latest Dabo Swinney football camp and he has some similarities skill-wise of a Mike Williams in the same age in high school.

He has tremendous upside in Clemson's offense and will be a big jump ball threat with his height for years to come.