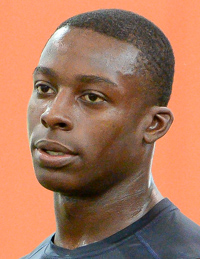 Wide Receiver
B I O
Ranked as No. 36 overall player in the nation by Rivals.com…fourth best player in the state of North Carolina…ranked No. 153 overall player by Prep Stars… had outstanding game in the Shrine Bowl for North Carolina with 264 all-purpose yards and two scores…had 4-54 receiving and a touchdown, and had 4-203 on kickoff returns, including a 99-yard return for a touchdown….that was no surprise to anyone as Powell had a touchdown on a kickoff return in each of the first three games of the 2015 season….then teams stopped kicking to him…had incredible senior year, leading Rose High school to a 12-3 record and the berth in the state championship….had 65 receptions for 1557 yards and 25 touchdowns…that is an average of 24 yards per catch…also had 23 rushes for 249 yards and five scores, he averaged 11 yards per rush…in terms of returns, had 21 kickoff returns for 754 yards and four scores, a 36-yard average…had 10 punt returns for 353 yards and four scores, a 35.3 average…overall, had 38 touchdowns in 2015, 25 receiving, five rushing, and eight on kick returns…first-team all-state as a junior and senior…had 67 receptions for 1248 yards and 19 touchdowns in 2014…added 14-445 yards on kickoff returns for 32-yard average…had 23 total touchdowns…in 2013, he had 47 catches for 1,228 yards and 21 touchdowns… had 24 total touchdowns…for his career, had 203 receptions for his 52 games for 4,301 yards and 68 touchdowns…had 110 rushes for 828 yards and 13 touchdowns, he averaged 7.5 yards per rush…had 1200 kickoff return yards and 353 punt return yards…. also four-year letterman in basketball…averaged 15 points per game as a freshman, 20.4 as a sophomore, 17.1 as a junior and 18.4 through seven games as a senior…also averages eight rebounds a game for his career to go with three assists and three steals…55 percent field goal shooter for his career through 64 games…had 1,145 career points and 508 career rebounds through seven games of his senior year…played his high school football for David Wojtecki…recruited by Dan Brooks and Jeff Scott.

Mickey Plyler on Powell: This is the most complete receiver in this class. Simply stated, Powell can do it all. He catches the ball well. He high points it well. He is explosive in the open field. Powell is a terrific kick return prospect. He works hard and takes his trade serious. It would be hard for any freshman to crack the lineup at receiver this year's but I think Powell gets a shot at early playing time.