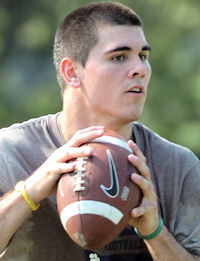 Quarterback
B I O
Nephew of Pro Football Hall of Fame quarterback Jim Kelly. As a junior, Kelly ran 86 times for 1,057 yards and 15 touchdowns. He completed 137-of-249 passes for 2,159 yards with 24 touchdowns and eight interceptions. No other New York player has rushed for more than 1,000 yards and passed for more 2,000 yards in the same season. Kelly was the first to win the NFL-sponsored "Punt, Pass and Kick" competition in four age groups. He quarterbacked his team to a Nike 7on7 passing league championship. He was named an Elite 11 QB after participating at the Elite 11 camp at Pepperdine University.