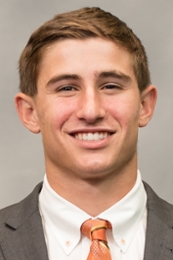 Wide Receiver
B I O
Original walk-on and son of head coach Dabo Swinney … has been the team’s starting holder since his debut season in 2017 … enters 2021 having previously caught 28 passes for 168 yards and a touchdown in 424 offensive snaps over 56 career games … his 56 career games played entering 2021 are already tied for ninth-most in school history.

2020: William V. Campbell Trophy semifinalist … All-ACC Academic Team selection … caught seven passes for 29 yards and had a nine-yard punt return in 127 snaps over 12 games … caught a three-yard pass in games at Wake Forest and vs. The Citadel … added a reception vs. Virginia … caught two passes for 13 yards at Georgia Tech … shared special teams player of the game honors at No. 4 Notre Dame as the battery of he, long snapper Jack Maddox and kicker B.T. Potter helped produce 16 points on four field goals and four PATs … gained 10 yards on two receptions vs. Pitt.

2019: Recorded 12 catches for 94 yards in 146 offensive snaps over 15 games while also serving as the holder on placekicks in all contests … posted a four-yard reception and eight-yard punt return vs. Georgia Tech … caught two passes for 24 yards vs. Charlotte … gained four yards on a reception at Louisville … rushed for eight yards vs. Boston College … caught three passes for 11 yards vs. Wofford … gained 13 yards on two receptions at NC State … rushed once vs. Wake Forest … gained 38 yards on three receptions vs. No. 22 Virginia in the ACC Championship Game.

Before Clemson: Top receiver for Daniel High School in Clemson, where he had 48 catches for 603 yards and six scores in 2016 … led team in total receptions, yards and touchdowns … had at least two receptions in every game in 2016 … named all-region as a senior, he was team offensive MVP and one of the team captains … had strong early-season game against rival Seneca with six receptions for 73 yards and a touchdown … in win over Ninety Six, had career highs in receptions (7), yards (118) and touchdowns (2) … had longest reception of the year on a 53-yard scoring catch against Wren … had over 900 all-purpose yards including kick returns … as a junior had 33 receptions for 420 yards and five touchdowns … played four years of football, two years of basketball and four years of baseball … played wide receiver, cornerback and various positions on special teams, including holder, at Daniel High School … coached by Jeff Fruster.