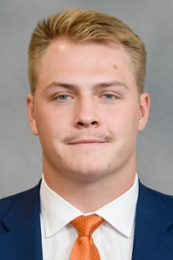 Offensive Line
B I O
ESPN Freshman All-American for 2020 who enters 2021 having previously played 199 career snaps over 11 games.

2020: Carved out a key reserve role as a true freshman, garnering Freshman All-America honors from ESPN.com after playing 199 snaps over 11 games and helping Clemson lead the ACC as the only team to allow fewer than two sacks per game … played 26 snaps in collegiate debut at Wake Forest … played 24 snaps in Clemson’s shutout win vs. The Citadel … played three snaps vs. Virginia … played eight snaps vs. No. 7 Miami … played 48 snaps at Georgia Tech … played nine snaps vs. Syracuse … played 14 snaps vs. No. 4 Notre Dame … played 35 snaps vs. Pitt, helping protect Trevor Lawrence during his 403-yard passing performance … played eight snaps at Virginia Tech … played 14 snaps and produced a memorable de-cleating block in ACC Championship Game vs. No. 2 Notre Dame … played 10 snaps in Sugar Bowl vs. No. 3 Ohio State.

Before Clemson: Played for Brian Landis at Frederick Douglass High in Lexington, Ky., where the two-year captain did not allow a sack in 15 games as a senior … first-team all-state and earned 5A district player of the year … added 32 tackles, including 11.5 tackles for loss with 6.5 sacks … unanimous top-100 player nationally … during the early signing period, Rivals.com ranked Parks as the No. 59 best player in the nation, eighth-best at his position and the No. 2 player in Kentucky … was listed as the 63rd-best overall player, eighth-best offensive tackle and best player in Kentucky by PrepStar … ranked as the No. 71 overall player by 247Sports, seventh-best at his position and second-best in the state of Kentucky … ranked as No. 89 overall player in the nation by ESPN.com, the 13th-best offensive tackle and second-best player in Kentucky … committed to Clemson on Oct. 2, 2018 … recruited to Clemson by Robbie Caldwell.

Personal: Born Oct. 19, 2001 … pre-business major who enrolled at Clemson in the summer of 2020 … was Clemson’s first signee from Kentucky since Justin Miller in 2002.