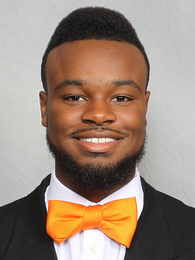 Wide Receiver
B I O
Wide receiver who has been part of the regular rotation for the Tigers each of his first three years … Entered 2018 with 32 receptions for 317 yards and a touchdown in 901 snaps over 41 games (one start) in his career.

2018: Recorded two catches for 22 yards in a season-opening win against Furman … had an 11-yard catch against Georgia Southern … gained five yards on a reception at Wake Forest.

2016: Produced 11 catches for 108 yards in 13 games, with a touchdown … caught first career scoring grab against SC State, when he made two grabs for 16 yards … posted 25-yard reception at Georgia Tech … had key 15-yard catch in fourth quarter comeback win over No. 3 Louisville … had one catch at Florida State … had 15-yard reception against Syracuse … had two grabs for 22 yards against South Carolina.