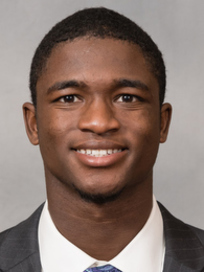 Cornerback
B I O
Entered 2018 with 57 tackles, 0.5 tackles for loss, a quarterback pressure, three interceptions and eight pass breakups in 773 snaps over 26 games (12 starts) in his career … had a tackle, pass breakup and two interceptions for 84 yards and a touchdown in the Spring Game … No. 49 player in the nation in the preseason by NFL.com and No. 63 player by Sports Illustrated … preseason second-team All-ACC by Athlon … preseason third-team All-ACC by Phil Steele.

2018: Started each of Clemson’s first five games, recording at least one tackle in four of the five contests.

2016: Posted 15 tackles in 115 snaps (13 games) … three of his stops came on special teams … played first collegiate game against Troy, earning nine snaps … posted team-high seven tackles, including one on special teams, in win over SC State … appeared in 37 snaps versus the Bulldogs … saw 18 snaps against Boston College, chipping in a tackle … totaled four tackles and 29 snaps against Syracuse … had half of a tackle for loss in 13 snaps in win over South Carolina … posted first pass breakup of career in 31-0 win over Ohio State in the Fiesta Bowl.

Personal: Majoring in sports communication … his cousin, Lamar Jackson, was the starting quarterback for Louisville from 2015-17.