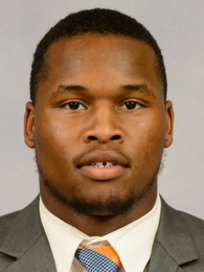 Linebacker
B I O
Talented linebacker who saw most of his time on special teams in his first active season as a Tiger in 2017.

2018: Opened the season with four tackles, including 1.5 for loss against Furman … posted one tackle in each game at Texas A&M, at Georgia Tech and at Wake Forest.

Before Clemson: Five-star linebacker prospect … second-team USA Today All-American … played in the Under Armour All-American game … No. 1 prospect in Maryland and the No. 6 overall player in the nation according to Rivals.com … rated the No. 1 outside linebacker, No. 5 player in Maryland and the No. 21 prospect nationally by ESPN … rated the No. 17 overall prospect in the nation by Tom Lemming … No. 28 prospect nationally by PrepStar … had 89 tackles, four sacks, two forced fumbles and two fumble recoveries in the 2015 season … played for IMG Academy in Florida in 2015 … had those 89 tackles in just eight games … IMG was 9-0 for the season … had 15 tackles in a game twice, each of his last two games of the year … had 79-yard fumble return against Bergen Catholic for a touchdown … had at least one tackle for loss in seven of his eight games … had double figures in tackles in four of the eight games … had 111 tackles, 10 tackles for loss, four sacks and two interceptions in 2014 for St. Frances Academy in Maryland … recruited by Brent Venables … narrowed his college choices to Clemson, Auburn, and LSU … played for Kevin Wright at St. Frances and Chris Weinke at IMG Academy … recruited by Brent Venables and Mike Reed.