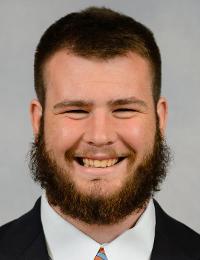 Offensive Line
B I O

Enrolled in January 2016 and has started at both guard and tackle during his Clemson career … entered 2019 bowl season having played 2,190 snaps over 53 games (36 starts) in his career.

2016: Shared offensive Rookie of the Year honors with fellow tackle Tremayne Anchrum … had 14 knockdown blocks in 584 snaps over 12 games (seven starts) … appeared in first collegiate game against Troy, logging 11 snaps with an 82 percent grade … played 32 snaps against SC State and graded 85 percent with a knockdown … played 15 snaps at Boston College … logged 25 snaps in the road win over No. 12 Florida State, grading 88 percent … made first career start against Syracuse, responding with 81 percent grade on 57 snaps … played all 98 snaps against Pittsburgh and graded 89 percent, with four knockdowns … graded 89 percent with two knockdowns in 64 plays at Wake Forest … graded 90 percent with a knockdown in 60 snaps of win over South Carolina … posted 83 percent grade in 70 snaps against Virginia Tech … played 53 snaps in the Fiesta Bowl win over Ohio State, logging two knockdown blocks … tallied two knockdowns in 95 snaps against Alabama in National Championship Game.

Before Clemson: Rated among the top 200 players nationally … rated as the No. 129 overall player by Scout … listed No. 173 by ESPN and 177 by Rivals … 10th-best prospect in North Carolina by ESPN and No. 11 by Rivals … 10th-best prospect at his position by ESPN … first-team Associated Press All-State offensive lineman in 2014 and 2015 … invited to The Opening in Oregon in summer prior to senior year … played in the Semper Fidelis All-American Bowl … first-team all-conference in 2014 and 2015 … helped his 2014 team to 11-3 record … narrowed his school choices to Clemson, Duke, Miami and North Carolina … played his high school football for Chris Metzger … recruited by Robbie Caldwell.