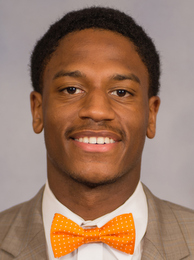 Safety
B I O
Redshirt junior who was the primary starter as a nickel back in 2014 before suffering a season-ending ACL injury in August camp ... has 54 tackles, four tackles for loss, four interceptions for 63 yards, four quarterback pressures and seven pass breakups in 813 snaps over 25 games (six starts) in his career.

2015: Redshirted after suffering a torn ACL in the preseason.