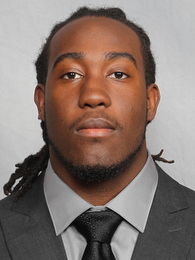 Defensive Line
B I O
Defensive tackle who has seen playing time as a reserve the last three seasons ... has 38 tackles, three tackles for loss, 1.5 sacks and four quarterback pressures in 338 snaps over 23 games.

2015: Had 14 tackles, including a sack, in 66 snaps over six games ... notched a sack in his first career game against Wofford ... posted four stops against Appalachian State ... logged nine snaps against Georgia Tech ... had two tackles against Boston College.

Before Clemson: Shrine Bowl selection ... Offense-Defense All-American Bowl selection ... all-conference, all-county and all-area as a senior ... had a team-high 110 tackles, a team-high 27 tackles for loss and five sacks as a senior ... had 72 tackles, 20 tackles for loss, 12 sacks and two caused fumbles as a junior ... played basketball and ran track ... coached by Garry Bishop at North Brunswick High School ... recruited by Dan Brooks.