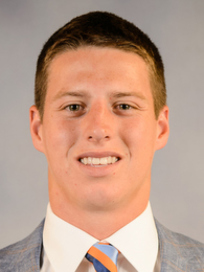 Tight End
B I O
Impact contributor his first two seasons as a blocker on offense and member of several special-teams units, but sat out in 2017 due to injury … entered 2018 with two receptions for 21 yards in 252 snaps over 30 games (one start) in his career.

2018: Contributed at H-Back in four of the team’s first five contests, helping block for a unit that exceeded 200 rushing yards in every contest in which he’s played … caught first pass of the season at Wake Forest, gaining four yards.

2015: Logged five tackles on special teams and appeared in all 15 games … had 96 snaps to his credit, and appeared on offense in 14 of the 15 games … major reason the Tiger rushing attack averaged over 200 yards per game … saw 14 snaps in his first career game against Wofford, while also playing special teams … notched first career tackle in the Appalachian State contest … posted special teams tackle against Notre Dame … notched two special teams tackles in win over Georgia Tech … played 11 snaps offensively at Miami … notched a tackle on kickoff coverage against Oklahoma … had key block on Wayne Gallman’s touchdown run in the National Championship Game against Alabama.

Personal: His father, Dayne Williams, played for Florida State against Clemson in the famous 1988 “Puntrooskie Game;” Dayne took the snap from center on the play, put the ball between the legs of the upback, Leroy Butler, who then raced down the sideline … majoring in economics … born Jan. 26, 1996.