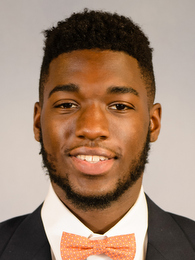 Wide Receiver
B I O
Junior wide receiver burst onto the scene as one of Clemson's biggest downfield threats in 2015, and only enhanced that reputation as a sophomore ... has 72 career receptions for 1,306 yards and 14 touchdowns in 754 snaps over 28 games (one start) ... averaging 18.1 yards per catch over his career, the fourth-best figure in Clemson history and third-best among active ACC players.

2016: Second on the team with nine touchdown receptions, part of 36 catches over 15 games and 449 snaps ... averaged team-best 19.1 yards per reception, one of the top season figures in Clemson history ... scored on 23-yard touchdown in the fourth quarter of the win over Troy ... followed the next time out with a 17-yard touchdown reception against SC State ... had breakout performance against No. 3 Louisville, hauling in two long touchdown catches from Deshaun Watson ... followed with two touchdown catches at Boston College ... had two grabs for 69 yards at Florida State ... posted two long touchdown catches against Syracuse and hauled in five passes total for 125 yards ... caught touchdown pass in the one-point loss to Pittsburgh ... had two big receptions for 69 yards in ACC Championship Game against Virginia Tech ... had five grabs for 94 yards in the National Championship win over Alabama, including a 43-yard catch and run that sparked the Tigers early.

2015: Had 34 catches for 582 yards and five touchdowns in 13 games (one start) ... his 17.1 yards per catch average was best on the team and five touchdown catches tied for third most ... snagged three catches for 36 yards in his first collegiate game ... had two catches for 26 yards in road win at Louisville ... game-high five catches for 96 yards in win over Georgia Tech ... posted two grabs for 97 yards, including a 67-yarder that was a near touchdown ... sat out the Miami game for disciplinary reasons ... caught first career touchdown at NC State ... followed with another on a screen pass from 38 yards out the next time out against Florida State ... snagged a 40-yard touchdown catch at Syracuse ... posted an 11-yard touchdown snap against Wake Forest, his fourth straight game with a score ... also threw a 35-yard pass to Hunter Renfrow on his first career attempt ... broke Sammy Watkins' freshman school record with a fifth straight game with a touchdown at South Carolina; hauled in a 55-yarder against the Gamecocks in the second quarter ... posted two catches in the ACC Championship game against North Carolina ... did not appear in the final two games due to suspension.