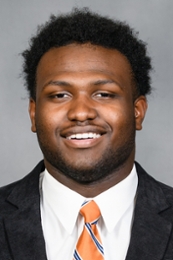 Defensive Line
B I O
Enters 2020 credited with three tackles (2.0 for loss) and a sack in 20 snaps over four career games.


2020: Played 20 snaps as a true freshman, being credited with three tackles (2.0 for loss) and a sack over four games … made collegiate debut vs. The Citadel, tying for the team lead with 2.0 tackles for loss and producing one sack among his three tackles.