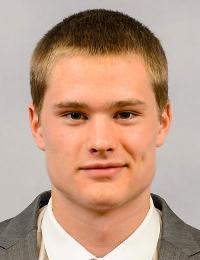 Linebacker
B I O
Key special teams contributor early in his career who earned a starting role as a fifth-year senior … Entered 2019 bowl season credited with 142 tackles, 9.0 tackles for loss, 5.0 sacks, an interception, a pass breakup, three forced fumbles and two fumble recoveries in 797 snaps over 56 games (13 starts) in his career.

2019: Entered bowl season with 68 tackles (4.5 for loss), 3.5 sacks, an interception, two forced fumbles and a fumble recovery in 517 snaps across 13 games (all starts) … posted seven tackles (one for loss) and a forced fumble vs. Georgia Tech … added five tackles vs. No. 12 Texas A&M … notched nine tackles including a sack at Syracuse … contributed two tackles vs. Charlotte … posted five tackles and contributed to the game-winning stop on a two-point conversion attempt at North Carolina …  notched two tackles and his first career interception vs. Florida State … recorded seven tackles including a nine-yard sack at Louisville … shared team defensive player of the game honors after leading Clemson with nine tackles vs. Boston College, including a sack in which he forced a fumble that Logan Rudolph returned 39 yards for a touchdown … led team with seven tackles at NC State and returned a fumble inside the Wolfpack 5 to set up a Clemson touchdown … added two tackles vs. Wake Forest … notched six tackles at South Carolina… recorded seven tackles (0.5 for loss) vs. No. 22 Virginia in the ACC Championship Game … named Defensive MVP of the Fiesta Bowl after posting 12 tackles (0.5 for loss) vs. No. 2 Ohio State.

2018: Credited with 35 tackles (2.0 for loss), 1.0 sack and a fumble recovery in 127 snaps over 15 games … made one tackle in season opener vs. Furman … recorded two tackles each in wins against Texas A&M, Georgia Southern, Georgia Tech and Wake Forest … contributed four tackles, including one for loss, at Florida State … posted five tackles including a sack vs. Louisville … added three tackles vs. Duke … contributed four tackles vs. South Carolina … registered five tackles and a fumble recovery against Pitt … added a tackle vs. No. 1 Alabama in the National Championship Game.

Personal: Graduated Aug. 10, 2018 with a degree in sports communication … two-time ACC Honor Roll selection … completed microinternships with RaceTrac in 2018 and G.E. in 2019 … comes from a family with extensive military ties and was selected to run the American flag down the hill for Clemson prior to its 2019 Military Appreciation Day game … born April 16, 1996.