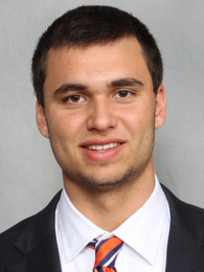 Tight End
B I O
Tight end who is a mainstay on Clemson’s special teams units … entered 2018 with five receptions for 49 yards and a touchdown in 243 snaps over 44 games (one start) in his career.

2018: Caught a six-yard pass in the season opener vs. Furman … added a 17-yard reception vs. Georgia Southern.

2015: Logged 29 snaps over six appearances on offense … saw seven snaps of action in the season opener against Wofford … played four snaps against Boston College, in addition to his special teams duties … logged six snaps at Miami … made a special teams tackle at NC State.

Personal: His father, Bill, was a starting defensive end on Clemson’s 1981 National Championship team; he was a four-year letterman (1977-79,81); started and had 10 tackles in Clemson’s win over Nebraska in the 1982 Orange Bowl; he is on the Clemson Board of Trustees and won the 2013 Brian Dawkins Clemson Lifetime Achievement Award, which is presented to a former Tiger by head coach Dabo Swinney … Eagle Scout … majoring in history … born Jan. 25, 1995.