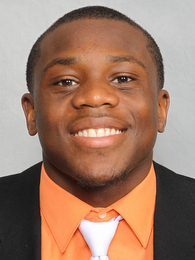 Wide Receiver
B I O
All-ACC wide receiver each of his three seasons ... Clemson's career leader with 245 receptions (fifth in ACC history) for 2,458 yards and 19 touchdowns in 1,981 snaps over 43 career games (36 starts) ... caught a pass in 42 of 43 games and finished with a streak of 38 straight with at least one reception, setting a school-record streak ... had six games with at least 100 receiving yards ... fifth in Clemson history with 19 career receiving touchdowns ... earned invitation to the Senior Bowl.

2016: Second-team All-ACC (media) ... third-team All-ACC (coaches) ... named Clemson's special teams player of the year at the season banquet ... second on the team with 76 receptions for 614 yards and five touchdowns in 709 snaps over 15 games (15 starts) ... owned top kickoff return (23.3) average on the team, while adding four special teams tackles in coverage ... produced 71 yards on seven catches against Troy ... had key 77-yard kickoff return to spark fourth-quarter comeback in win over No. 3 Louisville ... also had first touchdown catch of the season in the opening half against the Cardinals ... notched four catches for 45 yards and totaled 108 all-purpose yards at Boston College ... caught game-winning touchdown pass in overtime against NC State, a 10-yarder from Deshaun Watson ... snagged seven balls, including one for a touchdown, against Syracuse ... had highlight-reel game against Pittsburgh with 13 catches for 125 yards ... also posted a touchdown catch against the Panthers ... caught fade pass for a touchdown in rivalry matchup with South Carolina, one of his team-high nine receptions ... led Tigers with seven grabs against Virginia Tech ... had a tackle on punt coverage against Ohio State in the Fiesta Bowl ... posted 77 yards on kickoff returns in the National Championship win over Alabama.

2015: First-team All-ACC (media, coaches) ... team’s leading receiver with 93 catches for 901 yards and six touchdowns ... also had a rushing touchdown ... had eight or more catches in four games, including two with double digits ... his 93 catches were second-most in a single season in Clemson history, trailing only the 101 by current Buffalo Bills standout Sammy Watkins in 2013 ... named special teams player-of-the-game for his effort in the opener against Wofford, which included a 39-yard kickoff return and 22 yards on a pair of punt returns ... caught six passes for 73 yards, including a 41-yard touchdown, versus Appalachian State ... returned four kicks for 128 yards and added a receiving touchdown in 24-22 victory over No. 6 Notre Dame ... coaching staff player-of-the-game offensively against Boston College after tallying 10 catches for 164 yards and a touchdown ... scored first career rushing touchdown at Miami ... snagged nine passes in Florida State game ... caught career-high 12 passes at Syracuse ... had big performance in ACC Championship Game with seven catches for 96 yards ... scored touchdown on a double move in the second half ... led Tigers with five receptions in the Capital One Orange Bowl ... caught a touchdown pass in the National Championship Game against Alabama, while also returning a kickoff 43 yards.