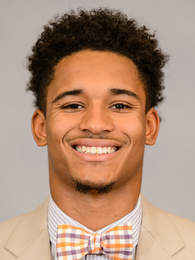 Cornerback
B I O
Defensive back who redshirted the 2015 season, but worked his way into game action as a freshman in 2016.

Before Clemson: All-around player at nearby Daniel High School ... had 55 tackles, four interceptions and nine pass breakups along with a 22.7-yard average on 12 punt returns as a senior ... had two punt return touchdowns and 121 yards against Walhalla High School as a senior ... first-team all-state by High School Sports Report ... Shrine bowl selection ... coached by Randy Robinson ... recruited by Mike Reed.