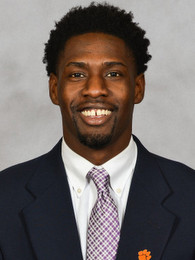 Guard
B I O
Overview
Left-handed combo guard signed with the Tigers in the fall of 2014 ... served as point guard for his high school team, Pebblebrook ... brings a competitive mindset and toughness to the program, similar to that of outgoing point guard Rod Hall ... physical player who is equally comfortable driving to the basket and shooting from long distance ... recruited initially by former assistant coach Earl Grant, and also by current assistant Steve Smith ... originally from the state of Louisiana, he moved to Atlanta at the age of eight ... competitive racquetball player in elementary school ... majoring in psychology.

Appeared in 23 games, averaging 7.6 minutes per contest ... made 19-54 field goals, including 12-35 from three ... averaged 2.4 points per game ... posted a positive assist-turnover ratio (11-4) ... contributed five steals defensively ... posted eight points against UMass, hitting 3-4 field goals in eight minutes ... posted season-high 11 points in win over USC Upstate, where he was 3-6 from three-point distance ... notched six in the win over Wofford, again connecting on multiple threes ... scored eight in the February 23 game at Georgia Tech, making 3-4 shots including 2-3 from three ... also played well against the Yellow Jackets, his home state school, in the ACC Tournament ... was 2-2 from three in six minutes in contributing six points ... tallied five points in 11 minutes to end the regular season at Boston College.

Before Clemson
Four-star rated prospect by ESPN.com and Scout.com ... rated as the No. 91 prospect for the class of 2015 by Scout and No. 129 overall by Rivals.com ... billed as nation’s No. 14 point guard prospect by Scout and No. 25 by ESPN ... two-time, second-team AAAAAA all-state selection (2014, 2015) ... led Pebblebrook to the AAAAAA state final as a senior and semifinals as a junior ... led the Falcons with 19 points in the championship game, helping his team to a 27-6 final record ... averaged 17.9 points and 4.5 assists per game as a junior, when he led Pebblebrook to the Region 4 crown ... also received scholarship interest from Kansas State, Oklahoma State, Tennessee, VCU Virginia Tech and Xavier ... born Nov. 1, 1996.