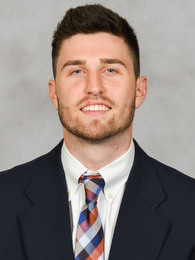 Guard
B I O
Overview
Joined team as a walk-on in August 2014 after spending his first two years with the program as a student manager … appeared in 20 career games, scoring 11 points on 4-14 shooting ... father, Marty, was an assistant coach for five seasons under Brad Brownell at two different stops … Marty coached under Brownell at UNC Wilmington from 2002-06 and Wright State in 2006-07, helping the Seahawks to a pair of NCAA Tournament berths and the Raiders to one as well … Marty is currently an assistant coach at Winthrop University, and has also coached at The Citadel, Coastal Carolina, College of Charleston, East Carolina and Kennesaw State … earned undergraduate degree in marketing in May 2016.

2016-17
Appeared in six games, for a total of 15 minutes ... made 1-5 field goals for the season, a two-point basket in the win over Coppin State on Dec. 4 ... notched an assist at Florida State and a steal on Senior Day against Boston College.

2015-16
Appeared in six contests, for a total of 11 minutes ... made three-point goal in three minutes in November 15 win over UTSA ... followed with a second make from long distance at Minnesota two weeks later ... posted an assist in the opener against North Carolina Central ... also saw action against USC Upstate, Presbyterian and at Boston College.

2014-15
Appeared in eight contests, for a total of 12 minutes in his first season ... scored on a fallaway jumper in his first appearance against Florida A&M on Nov. 14 ... seven of his appearances came during the ACC regular season ... played two minutes in five of the games ... collected first career steal at Duke.