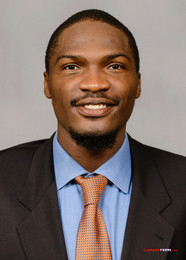 Center
B I O
Overview
Productive post player that signed in the fall of 2011 ... long, athletic center appeared in 128 career games (90 starts) ... logged over 2,600 minutes in the post ... finished his career with 744 points, 606 rebounds and 212 blocked shots ... ranked fifth in Clemson history in blocks at the time of his graduation ... earned team’s Tiger Pride Award after the conclusion of the 2015-16 season ... spent two years in the United States at famed basketball school Montverde Academy, playing for one of the most successful high school coaches in the nation, Kevin Boyle, as a senior ... cousin of current NBA player and former UCLA standout Luc Richard Mbah a Moute ... recruited to Clemson by former assistant Rick Ray ... on track to earn undergraduate degree in economics in May 2016.

BEST GAMES, 2015-16
Top effort was against Syracuse, a Final Four team, on the road in an overtime win ... posted 19 points and 10 rebounds to lift the Tigers to victory ... made 5-5 free throws in the game, Clemson’s first road overtime win in an ACC game in nearly 30 seasons ... outstanding once again versus Duke with 12 points and 13 rebounds ... added four blocks in the upset over the Blue Devils ... posted 17 points, 12 rebounds and career-high eight blocks at Virginia Tech ... his eight blocks tied for the most by any ACC player and were the most by a Tiger in an ACC game since Trevor Booker also had eight against North Carolina in 2006-07 ... posted 14 points in win over Rutgers, making 6-7 field goals ... posted 15 points and four blocks against Alabama ... tallied five blocks in game against South Carolina ... notched 15 points at Virginia, he made 7-9 field goals against the Cavaliers ... followed with 12-point showing in home win over Pittsburgh, where he added eight rebounds.

2014-15
Appeared in 31 games and started 30 ... played 753 minutes, an average of 24.3 per game ... averaged 7.6 points, an increase over his sophomore season, and 5.4 rebounds per game ... ranked third in the ACC with 2.0 blocks per game, tallying 63 for the season ... shot 50.8 percent from the floor, the second straight season he was over 50 percent ... grabbed 71 offensive rebounds, second on the team ... improved as a free throw shooter, making 65.7 percent of his attempts ... posted one double-double and a pair of double-figure rebound games ... reached double figures in the scoring column in eight games.

2013-14
Appeared in 35 games, with 34 starts at center ... played 982 minutes, an average of 28.1 per game ... averaged 6.5 points and 6.2 rebounds per game ... second on the team in rebounding, he was also second with 69 blocked shots ... ranked third among ACC players with 2.0 blocks per game, giving Clemson the No. 1 and No. 3 shot-blockers in the league ... shot 54.8 percent on field goals and totaled 80 more makes than he had as a freshman ... second on the team with 77 offensive rebounds, over two per game ... improved offensively during the ACC regular season, he averaged 6.9 points over the 18-game slate ... scored double figures in 10 games ... second on the team with three double-doubles and with four double figure rebound totals ... also second with 15 dunks ... ended the season on a high note, averaging 8.0 points and 3.3 blocks per game during the postseason (ACC Tournament + NIT) ... only game he missed was Virginia due to injury; he came off the bench against NC State in the following game before returning to the lineup full time after that.

Before Clemson
Three-star prospect according to most national recruiting services ... rated as high as the nation’s No. 19 prospect at the center position by ESPNU ... No. 24 at his position according to Scout.com ... led team to 23-4 overall record and No. 9 final standing in Powerade FAB 50 boys basketball rankings ... helped team earn berth in ESPN Rise National High School Invitational, where it finished runner-up to Findlay Prep (NV) ... posted eight points, four rebounds and two blocked shots in championship game but fouled out against a Findlay Prep team featuring two of the top post prospects in the country ... also had three blocked shots in the tournament opener against La Lumiere ... earned all-tournament honors at Kingdom of the Sun in Ocala, FL and at the Montverde Academy Invitational ... coached by Kevin Boyle at Montverde ... considered Florida State, George Washington and South Florida ... born Apr. 9, 1994.