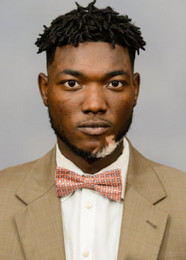 Forward
B I O
Overview
Post player who signed with the Tigers in the fall of 2011 ... brought a positive energy to the program, one of the major reasons he received the team’s Tiger Pride Award at the end of the 2014-15 season ... appeared in 104 games as a Tiger, for a total of 882 minutes ... recruited to Clemson by former assistant Earl Grant out of the Charlotte area ... comes from an athletic family, his parents both played basketball for Barber-Scotia College in Concord, N.C. ... sister, Shameka, played basketball at Gardner-Webb and scored over 1,000 points in her career from 2002-07 with the Bulldogs ... on track to earn undergraduate degree in management in May 2016.

2015-16
Appeared in 26 games, averaging 7.3 minutes per contest ... averaged 1.2 points and 1.8 rebounds per game ... played in 13 of the 18 ACC regular season games ... saw double figure minutes in eight games, with a high of 20 at Georgia on December 22 ... made three shots outside the three-point arc, the first three of his career ... made a three against USC Upstate in a game that saw him score a career-high nine points ... also made threes against Georgia and Florida State on the road ... top rebounding effort of the season was seven in the opener against North Carolina Central ... posted five boards against South Carolina in just six minutes ... posted two points and three rebounds in nine minutes at North Carolina, the NCAA Tournament runner-up.

2014-15
Played in all 31 games, averaging 9.5 minutes per contest ... averaged 2.4 points and 2.7 rebounds per game, career-high figures ... played 10.9 minutes per game in ACC play ... shot 52 percent, an improvement over his first two seasons ... made 23 free throws, nearly twice as many as he had in his career through two seasons ... saw double-figure minutes in 15 games ... played a high of 19 in the win at Florida State, where he came up big with eight points and eight rebounds ... played 17 minutes against Wake Forest, contributing six points and eight rebounds ... tipped in the game-winning field goal with 0.5 seconds left to break a 57-57 tie with the Demon Deacons ... posted seven points and four rebounds in 14 minutes at Pittsburgh, a Clemson win ... notched six points on 3-4 field goals at Miami ... scored four points, with three rebounds and two blocks in crucial road win at NC State.

2013-14
Appeared in 30 games with three starts ... averaged 10 minutes, 1.6 points and 2.1 rebounds per game ... played in 16 of the 18 ACC regular season games, averaging 11.2 minutes per contest ... blocked six shots in limited minutes, the first of his career ... scored in 17 different games, with a high of six points on two occasions ... posted six on 3-5 field goals against SC State in 11 minutes ... also grabbed seven rebounds in that win ... scored six in nine minutes against VMI, with three rebounds ... grabbed five rebounds in first career start against Florida State ... posted three points, three rebounds and two blocks in win over Wake Forest ... posted four points and four rebounds in road win over Georgia Tech ... blocked two shots in season opener against Stetson, he also had two points and seven rebounds in that game ... posted three points and five rebounds in road win over Virginia Tech.

Italy (August 2013)
Averaged 5.0 points and 13.0 rebounds per game ... high rebounder for the team on the four-game trip, he pulled in 52 ... led team with 21 offensive rebounds as well ... posted double digit rebounds in three of the four games ... played 80 minutes, 20 per game ... posted double-double in the final game against Airte, he had 12 points and 19 rebounds ... the 19 rebounds tied Landry Nnoko for most in a single game on the trip ... had 14 rebounds in opening win over Indiana Pesre.

2012-13
Appeared in 17 games as a first-year freshman ... played 96 total minutes, an average of 5.6 per game ... averaged 1.1 points and 1.2 rebounds per game ... shot 50 percent from the field in limited attempts ... averaged one rebound every 4.6 minutes of play ... played in seven ACC regular season games for a total of 30 minutes ... best game was against a top-20 and eventual No. 1 seed Gonzaga team in the Old Spice Classic ... played nine minutes and scored a pair of baskets, with two rebounds ... also scored four points against Florida A&M and SC State ... made 3-4 free throws in win over The Citadel ... made a field goal in 10 minutes of play at Florida State, when the Tigers were in major foul trouble throughout the second half ... posted two points at Miami in four minutes of play.

Before Clemson
Led Olympic High to 28-2 overall record, a fourth straight conference championship, and berth in the AAAA regional semifinals ... team was ranked among nation’s top 50 high school teams for most of the season ... North Carolina MVP of the Carolinas All-Star Classic after posting a double-double with 18 points and 13 rebounds ... selected to play in Jordan Brand Classic Regional Game, but was unable to compete due to a finger injury ... second-team all-state performer ... first-team all-district selection, he averaged 12.5 points and 11.5 rebounds per game as a senior ... led team to 2011 Upward Classic crown in Spartanburg, SC and scored 20 points in the championship game ... earned Charlotte Observer Player-the-Week and ESPN FAB 50 Spotlight Player-the-Week honors after posting 22 points and 13 rebounds in win over Charlotte Catholic in January of 2012 ... two-time MEGA 7 all-conference selection ... as a junior, averaged 10.8 points and 9.5 rebounds per game ... shot 58 percent from the field ... second-team all-district as a junior ... invited to the Reebok Breakout Underclass Camp in July of 2010 ... MVP for the class of 2012 in the North Carolina vs. South Carolina Battle of the Classes ... led Olympic to another 28-2 overall record, a conference crown, and a state sectional championship as a junior ... led school to a 19-8 record and conference championship as a sophomore ... played high school basketball for coach Ty Baumgardner ... also considered East Carolina and Appalachian State ... born Jan. 6, 1994.