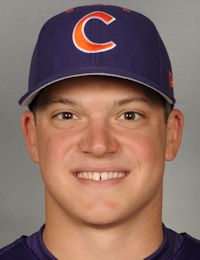 Catcher
B I O
Team co-captain in 2012...one of the most respected players on the team for his hard work and dedication on the field and in the classroom...was the primary backup behind the plate in 2009 and 2010, but he became one of the team's top hitters and batted in the #2 spot in the batting order during the second half of the 2011 season...slated to be the starter at DH, but has the versatility to make an impact at other positions...two-time team co-captain...a career .285 hitter with a .368 on-base percentage in 135 games (94 starts) over three seasons...has 33 doubles, one triple, six homers, 55 RBIs, 64 runs, 31 walks, 20 hit-by-pitches, and five steals...two-time All-ACC Academic selection...preseason first-team All-ACC by CollegeSportsMadness.com.

2009: Hit .194 with nine runs, four doubles, one homer, three RBIs, and a .341 on-base percentage in 40 games (20 starts, all at catcher)...allowed just one passed ball...hit a double and scored three runs against South Carolina-Upstate on Mar. 18; he also was the catcher for the entire game when five righthanders combined to pitch a no-hitter...went 2-for-4 with his first career homer in the first game of a doubleheader at Boston College on Mar. 28...went 2-for-4 with a double and run in the second game of a doubleheader against Maryland on May 3...came off the bench and went 1-for-1 with an RBI and walk against Tennessee Tech in the Clemson Regional on May 31...played for Chatham in the Cape Cod League in the summer, where he hit .179 in 18 games.

Before Clemson: Drafted in the 44th round (#1313 overall pick) by the Tampa Bay Rays in 2008...four-time member of the Center State All-Star team and four-time team MVP...Louisville Slugger and Gatorade Player-of-the-Year as a senior...#12 high school catcher prospect in the nation by Perfect Game...#3 prospect in New York by Perfect Game...State Class C Player-of-the-Year as a junior...hit .509 with five homers, 39 RBIs, and 41 steals as a junior...East Coast Pro Showcase and Area Code Games selection in 2007...lettered four times in baseball and two times in football at Cooperstown Central High School, where he was coached by Frank Miosek.

Personal: Three-time member of the ACC Academic Honor Roll...had a 3.67 career GPA through the 2011 fall semester...honored during the 2010 College World Series Opening Ceremonies for having Clemson's top GPA...majoring in management...born Philip Michael Pohl on July 22, 1990 in Bakersfield, CA.