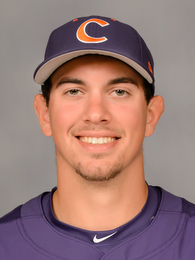 Outfielder
B I O
Outfielder who made the most of his limited opportunities ... one of the hardest-working players on the team ... a career .258 hitter with a .444 slugging percentage and .324 on-base percentage in 87 games (20 starts) over four seasons ... had eight even doubles, five homers, 22 RBIs, 21 runs, 13 walks and four steals.

2015: ACC Academic Honor Roll member ... hit .118 with two runs, a .211 on-base percentage and two walks in 15 games (two starts, including one in left field and one in right field) ... hit a pinch-hit single at Virginia Tech on March 21 ... went 1-for-1 with a run and walk off the bench at Western Carolina on March 24 ... suffered a shoulder injury at Wofford on May 5 and missed the rest of the season.

2012: Redshirted ... won the Dedication Award for outstanding work in the strength training room ... won the Omaha Challenge competition among fielders in the fall of 2011 ... played for Albany in the Perfect Game Collegiate Baseball League in the summer, where he hit .226 with nine RBIs in 28 games.

Before Clemson: Selected to the Vermont North-South All-Star Game ... led his team in batting average (.528) as a senior ... named team MVP and won the team’s Hustle Award as a senior ... lettered three times in baseball, three times in basketball and two times in football at Rutland High, where he was coached by Kevin Bellomo, who played under former Clemson head coach Jack Leggett at Western Carolina.