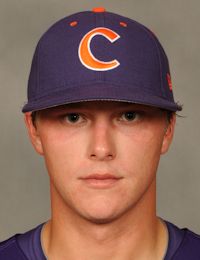 LH Pitcher
B I O
Lefthander who was used primarily to face lefthanded batters ... in 34.0 innings pitched over 64 relief appearances and four active seasons, he had a 2-1 record and 5.03 ERA while allowing 44 hits and 17 walks with 26 strikeouts.

2013: One of three winners of Clemson's Academic Achievement Award, which goes to student-athletes who make significant and consistent improvement in their academic coursework ... had an 0-0 record and a 1.69 ERA in 15 relief appearances ... in 5.1 innings pitched, he allowed seven hits and five walks with two strikeouts ... did not allow a steal ... in 1.1 innings pitched over six relief appearances in ACC regular-season games, he did not allow an earned run ... struck out both batters he faced in relief against Winthrop on Feb. 27 ... pitched a perfect sixth inning against Georgia Southern on May 12 ... retired both batters he faced in relief against #3 North Carolina in the ACC Tournament on May 24.

2011: Drafted in the 26th round (#786 overall pick) by the Kansas City Royals ... had a 2-1 record and 5.28 ERA in 24 relief appearances ... in 15.1 innings pitched, he allowed 19 hits (.292 opponents' batting average) and five walks with nine strikeouts ... did not throw a wild pitch ... allowed an earned run in only five of his 24 appearances ... held lefthanded batters to a .161 batting average ... allowed only four of 15 inherited baserunners to score ... pitched a perfect ninth inning with a strikeout against Eastern Michigan on Feb. 18 ... pitched 2.0 innings in relief, allowing no hits, no runs, and no walks with two strikeouts to earn his first career win against #4 South Carolina on Mar. 6 ... pitched a scoreless seventh inning against Furman on Apr. 26 ... struck out the only batter he faced with two outs in the seventh inning, the score tied 3-3, and the potential go-ahead run on third base to earn the win in the second game of a doubleheader at Virginia Tech on May 14 ... retired both batters he faced in relief with one strikeout at #4 Florida State on May 19.

2010: Had an 0-0 record and 5.79 ERA in six relief appearances ... in 4.2 innings pitched, he allowed five hits and five walks with four strikeouts ... allowed a run in only one of his six appearances and a hit in just two of his six appearances ... held opponents to 0-for-4 with two outs ... allowed just one hit in 10 at-bats and no runs with four strikeouts in 3.1 innings pitched over four relief appearances at home ... pitched a perfect eighth inning with two strikeouts against #16 Alabama in the Clemson Super Regional on June 13.

Personal: Graduated on May 10, 2013 with a degree in community recreation, sport, & camp management ... born Joseph Harvey Moorefield on Oct. 25, 1989 in Spartanburg, SC.