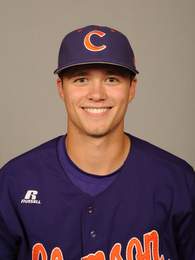 Infielder
B I O
One of the team's most versatile players; he has seen action at third base, second base, first base, and in the outfield in his career ... a career .224 hitter with a .339 on-base percentage in 106 games (83 starts) over two seasons ... has eight doubles, three triples, 19 RBIs, 40 runs, 45 walks against only 37 strikeouts, seven hit-by-pitches, nine sacrifice bunts, and 17 steals ... has good strikezone awareness.

Before Clemson: Rated as the #218 player in the nation and #15 player in Georgia by Perfect Game ... region player-of-the-year as a senior ... all-region selection as a sophomore, junior, and senior ... played hockey on a traveling team ... lettered four times in baseball at Centennial High, where he was coached by Jake Hill.