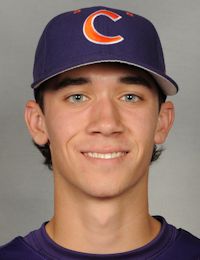 Catcher
B I O
Original walk-on catcher who played sparingly in his first year in the program in 2011...will provide depth behind the plate in 2012.

2011: Was 0-for-3 in four games, all off the bench...had six putouts without committing an error...made a diving catch of a foul pop-up while crashing into the backstop to end the game in the first game of a doubleheader against Gardner-Webb on May 7.