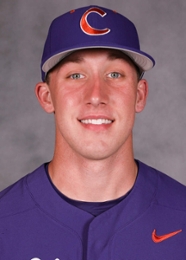 LH Pitcher
B I O


One of Clemson’s top relievers as a freshman.


Before Clemson: All-American by Collegiate Baseball and USA Today as a junior and senior … Mr. Baseball in South Carolina as a senior … Gatorade Player-of-the-Year in South Carolina as a junior … SCISA North/South All-Star … led his team to the state title as a sophomore, junior and senior … lettered six times in baseball and two times in swimming at Bishop England High School, where he was coached by Mike Darnell.


Personal: Majoring in psychology … born Geoffrey Eastham Gilbert on May 3, 2001 in Charleston, S.C.


• Interesting facts about family/parents – Both of his parents attended South Carolina
• One fact that most people don’t know – Had a chance to be a Junior Olympian in swimming
• Proudest childhood accomplishment – Winning the 12U Perfect Game national championship
• Ideal vacation spot – Rome, Italy
• Childhood hero – His grandfather
• One person, living or dead, to eat dinner with – Kobe Bryant