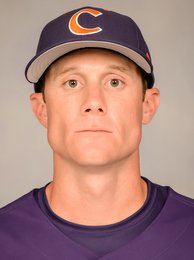 Student Assistant
B I O
is in his second year on the Tiger coaching staff in a full-time capacity in 2015, serving as the volunteer assistant coach. His duties include assisting with the pitching staff and on-campus recruiting. Faris was a starting righthander on three Clemson teams (2004-06) before playing four seasons in the minor leagues.

Faris served as a student assistant coach at Clemson in 2013, assisting Pitching Coach Dan Pepicelli. The pitching staff had a 3.21 ERA, Clemson’s best mark since 1996.

In 2014, the staff was led by Daniel Gossett, who was a First-Team All-ACC selection and one of 21 semifinalists for the Golden Spikes Award. The righthander was 7-2 with a 1.93 ERA, .202 opponents’ batting average and 107 strikeouts, the most by a Tiger since 1996 (Kris Benson). Closer Matt Campbell had a 4-0 record, eight saves, an 0.84 ERA, a .144 opponents’ batting average and 45 strikeouts in 32.0 innings pitched. Matthew Crownover earned All-ACC honors as well.

After pitching limited innings as a freshman in 2004, Faris emerged as a versatile pitcher with a 6-4 record, a team-best 2.60 ERA and one save while allowing just one home run in 20 appearances (10 starts) to earn Second-Team All-ACC honors. The highlight of his 2005 season came against No. 4 South Carolina when he pitched a complete game five-hitter to earn the win. He received ACC Pitcher-of-the-Week honors.

The 30-year-old Faris, a two-time member of the ACC Academic Honor Roll during his time as a player, received his degree in sport management with a minor in business administration from Clemson in 2013. He was born June 30, 1984 in Richmond, Va.