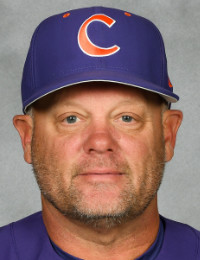 B I O
Greg Starbuck is in his second year with the Tiger program as volunteer assistant coach in 2017. He previously worked 17 seasons (1999-15) as an assistant coach at Elon. Starbuck coaches the infielders as well as assisting with the hitters and serving as the third-base coach.

Starbuck coached the 2016 team to 44 wins, the ACC championship and a top-eight national seed under first-year head coach Monte Lee. Clemson, who was ranked No. 15 in the final USA Today coaches poll, slugged an ACC-high 75 homers, tied for seventh most in the nation, thanks in large part to Seth Beer, who won the Dick Howser Trophy. Beer, who batted .369 with 18 homers, 70 RBIs and a .535 on-base percentage, became the first freshman to win the award and the first freshman to be named ACC Player-of-the-Year.

In 2013, Elon won its second SoCon Tournament title and advanced to NCAA Regional play, where it reached the regional finals.

In 2006, Starbuck was a part of Elon’s first-ever SoCon regular-season title with a 21-6 league mark. The team also collected its second regional berth in five seasons, playing in the Clemson (S.C.) Regional as the No. 2 seed.

During Elon’s historic 100th season of baseball in 2002, Starbuck helped the squad compile a 34-23 record. In just its third official season of Division I baseball, the Phoenix received an at-large bid to the NCAA Tournament and played in the Clemson Regional.

Starbuck played at UNC Asheville as a shortstop for two years (1985,86) after transferring from Montreat, where he played two seasons (1983,84). He played all four seasons of college ball under head coach Kenny Bagwell, who played (1970,72) and was an assistant coach (1975,77) at Clemson.

The native of Kernersville, N.C., received his bachelor of science degree in physical education from Winston-Salem State in 1991. Starbuck and his wife, April, have three sons, McGwire, Banks and Jackson, and a daughter, Brettlyn. Starbuck was born June 11, 1964 in Winston-Salem, N.C.