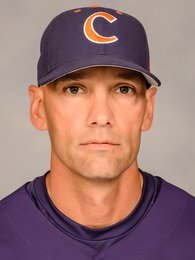 Associate Head Coach
B I O
Dan Pepicelli is in his sixth year with the Tiger program as the pitching coach and third as the associate head coach in 2015. Pepicelli (pronounced peh-pih-SEH-lee) spent nine seasons (2001-09) as the head coach at St. John Fisher College in Rochester, N.Y.

In his first year at Clemson in 2010, Pepicelli molded the young pitching staff into a consistent group that was a big reason the Tigers reached the College World Series. He became Clemson’s first pitching coach in history to lead a staff to Omaha in his first year in the program.

In 2010, Pepicelli coached Casey Harman, who had an 8-4 record and 3.86 ERA in 121.0 innings pitched over 19 starts. He had a 2.73 ERA and 27 strikeouts against four walks in 29.2 innings pitched in the 2010 NCAA Tournament. Pepicelli also developed Alex Frederick, who was seldomly used in 2009, to become Clemson’s top reliever in the 2010 NCAA Tournament. Frederick had a save in both of the Tigers’ wins in Omaha.

The 2011 Tiger pitching staff had a 3.32 ERA and .239 opponents’ batting average. Clemson also had a 2.66 strikeout-to-walk ratio, the third-best mark in school history. During one stretch of the season, Tiger hurlers combined to pitch 37.0 innings in a row without allowing an earned run. Pepicelli molded righthander Justin Sarratt into one of the ACC’s best pitchers as a fifth-year player, as he had a 7-2 record and 2.57 ERA along with 65 strikeouts against only 14 walks on the season.

In 2012, his pitchers had a 3.90 team ERA. Reliever Scott Firth led the staff with a 4-0 record, three saves and a 2.09 ERA. Starter Kevin Brady had a 2.54 ERA, while Pepicelli coached Daniel Gossett to one of the best seasons by a Tiger freshman pitcher in recent history. The righthander had a 6-3 record, two saves and a team-high 87 strikeouts.

During a 13-game stretch from Feb. 17 to March 13 in 2013, Clemson allowed three earned runs or less in each contest. That included six games against top-10 teams, only one of which was at home. It was the Tigers’ longest-such streak since 2006.

In 2014, the staff was once again led by Gossett, who was a First-Team All-ACC selection and one of 21 semifinalists for the Golden Spikes Award. The righthander was 7-2 with a 1.93 ERA, .202 opponents’ batting average and 107 strikeouts, the most by a Tiger since 1996 (Kris Benson). Closer Matt Campbell had a 4-0 record, eight saves, an 0.84 ERA, a .144 opponents’ batting average and 45 strikeouts in 32.0 innings pitched. Crownover earned All-ACC honors as well.

In each of his last seven seasons with the Cardinals, he directed them to the postseason, including their first Division III title game berth in 2007. The Cardinals also won ECAC Upstate Championship titles in 2004, 2005, 2007 and 2009. He was named the Empire 8 Athletic Conference Coach-of-the-Year in 2001 and 2007 as well.

Pepicelli, who also served as an assistant athletic director at St. John Fisher, received national attention for his team’s act of sportsmanship in 2008. In the ninth inning against visiting SUNY Oswego in the ECAC title game, a line-drive foul ball struck a Laker coach in the temple. Despite the fact the Cardinals were trailing 9-5, Pepicelli and the team elected to concede the game, effectively ending any chance at back-to-back NCAA Tourney berths. St. John Fisher was honored by the Committee on Sportsmanship & Ethical Conduct with the NCAA’s All-Divisions Sportsmanship Award for its courageous decision.

The 1990 graduate of SUNY Cortland, who earned a degree in economics/management science, was an all-region and all-conference selection during his playing days. In 1986 and 1987, he played at Mohawk Valley (N.Y.) Community College, where he was an all-region selection.

Pepicelli transferred to SUNY Cortland, where he played in 1989. Pepicelli then played at SUNY College at Oneonta in 1990, where he was an all-conference pick.

Pepicelli, 47, is married to the former Robyn Malloy, who served as an assistant coach with the Syracuse women’s soccer program from 2005-09. She was a player on the 1995 National Championship soccer team at Monroe Community College in Rochester, N.Y. and was a two-time captain at Syracuse (1996,97). She was later a coach at Monroe Community College when it won two national titles.